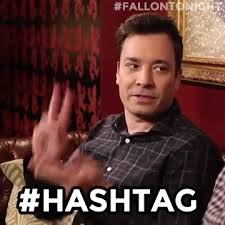 Over the past two weeks, I have had a couple of travel experiences that have been less than optimal to say the least.  It eventually happens to all of us.  A room isn’t ready, a flight is oversold, a car smells like smoke…you get the point.  The interesting part of these deficiencies is both of them involved my accommodations, both involved me posting on social media about the deficiencies and both were from service providers that I used to be employed by.  Most importantly, both resulted in great stories of how service providers are utilizing social media to ensure that they are providing superior service.

The first of the deficiencies occurred as my family and I were traveling for Spring Break back east.  I had found a great deal on a 2-bedroom suite with Oakwood, a company that provides Corporate Housing and is the absolute leader in the space.  Having spent 6 years with this group, I know the quality standards they have and the systems in place to ensure these standards are lived up to.  You can imagine my surprise when after checking in, I found a pretty major defect that was very evident (see below). 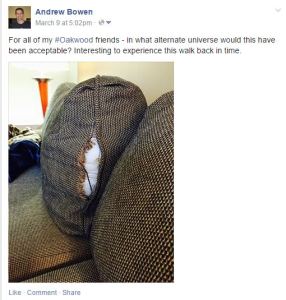 Now my son was too young to remember living in Oakwood Apartments but in fact he has lived in 4 different Oakwood buildings across 2 different states.

He was less than impressed with the portrait of Howard Ruby, one of the founders and owner of Oakwood Worldwide, on the wall of the lobby but I know that Howard is not willing to put his name on anything other than the best.  In this particular case, they had come up short.

The day after I posted on Facebook about my experience at Oakwood, the Community Manager was calling my cell phone and sending me emails in an attempt to rectify the situation.  My family and I headed out that morning to do some site seeing and by the time we returned that evening, we did not have a new cushion on the couch, WE HAD A NEW COUCH AND LOVE SEAT!!   They identified an issue, worked to rectify it and followed-up with me to ensure that I was satisfied.

Fast forward 2 weeks and I find myself in Atlanta, arriving at my hotel at a very late hour only to find that my room has been given to someone else and there are no longer any rooms available with Marriott.  Now this is the company that I went to work for after leaving Oakwood and I am an extremely loyal Marriott Rewards member.  I am also not afraid to post on social media in order to get a response.  The way these two organizations responded is telling of their social media savvy and customer service.

With Marriott I used a different medium, Twitter.  After getting bounced late at night, I sent the following tweet:

Upon seeing the tweet, Marriott customer service representatives contacted me directly asking for details and explained to me that there is actually a policy in place with Marriott that if they ever have to walk an Elite Guest, they will not only pay for the room at an alternative brand but also cut the Elite Guest a check for their inconvenience.  The General Manager of the hotel is scheduled to reach out to me and I am sure that Marriott will be conscious of when/where I go next.

In both of these cases, these service providers were actively monitoring their on-line presence, discovered a deficiency and remedied the deficiency.  I never expect a provider to be perfect but I do expect them to remedy when a deficiency is brought to their attention.  This was executed flawlessly by both Oakwood and Marriott, thank you both.

There are also several lessons here for the savvy traveler:

If I had not been known by Oakwood or had been an Elite Member at Marriott, I am sure my experience would have been different. Organizations reward your loyalty so pick a brand/hotel/location that best fits your needs and make yourself known.

Reach out when there is a deficiency

I could have easily just lived with the tear (I actually had intended to – the facebook post was more for my former comrades in arms than to raise any type of stink). Top notch providers of any service want to provide superior service but no one is perfect.

There is a time for a more direct approach but social media is almost never the medium for that (and way too many people use it for just that purpose).

In both of these cases I made sure to post on the same medium how wonderful the group was for rectifying the situation. If we all shared at least 3 compliments for every criticism the world would be a much better place.

If you are a business owner or a business influencer, I cannot stress enough that in today’s world, you have to monitor the hash tags relevant to your business. For decades business have been surveying guests to get a pulse on their performance, now people readily share with the world how you are doing.  Are you paying attention?

How about you?  What stories of phenomenal customer service do you have?

Looking forward to hearing them and we will see you on the road!!