This past weekend in the United States was Memorial Day weekend, a date that has become the unofficial start of summer.  Cook outs were had, parties were thrown, pools were re-opened and most of us got to enjoy a long weekend.  However, as I was driving around Town (probably heading to the grocery store for the 3rd time as I can never seem to get everything I need on the first pass) I was struck by the lack of outward celebration/reverence for what Memorial Day was set aside to actually commemorate – those who are and have served this great nation with their military service.  The lack of the simple act of putting out a flag was so noticeable that I conducted my own non-scientific survey…..just under 15% of homes recognized Memorial Day in my Town in 2015.

Now before the town-folk come at me with pitchforks and torches, there certainly were pockets of patriots, the occasional street that was lined with Old Glory on both sides for 4-5 houses in a row would lift my spirits after driving dozens without a single flag in place.  And to be fair, I did not drive the whole town but I believe the sampling size was large enough to reflect the larger apathy that has set over our nation as a whole (this is definitely not just a ‘Town’ thing).   I am also sure there were a lot of good “reasons” that people skipped this year:

“I posted an update on Facebook” – I am sure that reached more people anyways than those driving down your street.

“I need to replace my flag – it got tattered in the last storm” – Fair enough, they sure are hard to come by this time of year.

“I was traveling for the weekend” – Yep, busiest travel weekend of the year according to AAA.  Be sure to set the timer to the lights on your house and have a neighbor check on it.  We want to make sure it appears like you are home.  Perhaps the neighbor could set out your flag to make it appear as you are there?

“Storms are supposed to be really bad this afternoon” – Legit excuse for the afternoon but what about the morning?

“I don’t support the current/past/future administration’s foreign/domestic/space policy” – what does that have anything to do with reverence for the volunteer military and honoring those who have and continue to serve us?

However with all of those “reasons” for a lack of public display in place, I want all of you old enough to own or rent a home to think back to September 2001.  America had just experienced the largest single event causing loss of civilian life caused by a foreign militant in the history of our nation.  As a collective we were hurt, we were in shock and we found ourselves craving a common symbol of strength to show our unity, our resolve and our commitment to not let others intimidate us.  What symbol did the nation turn to?  Old Glory.

You saw the flag everywhere – literally.

Firefighters flew it from the back of their trucks

Nearly every house flew the flag daily for months 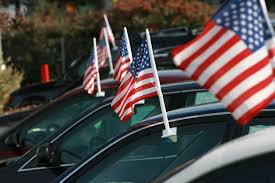 They routinely were placed in the passenger windows of automobiles

You couldn’t avoid the flag if you had to and that was on non-holidays and lasted for months.

So here we are in 2015.  In the 14 years since 9/11 we have fought 2 foreign wars, suffered multiple terror attacks, seen citizens of the world beheaded on live internet feeds and live under the constant threat of danger (just this morning the FBI warned the public about potential threats on airliners bound for the US from foreign ports – as a regular traveler I cannot express how comforting that is), yet if I were to take the actions of the multitudes of North Texans (arguably the most vehemently patriotic of all the states) as a leading indicator – we could care less to recognize or honor those who have physically defended our right to choose not to honor them.

America as a nation is not perfect.  There are many faults – not the least of which is our growing inability to empathize with those who hold different viewpoints than our own but I do not believe that Nationalism is dead.  I believe that those that I live around still believe that we have the good fortune to live in the greatest country that has ever existed.  I also believe we let ‘busy’ get in the way of ‘important’.  Showing reverence for those who have sacrificed some or all is important.

The good news?  We get two more chances in the next 2 months to make it up!!

Flag Day is coming on June 14th –  Here is your official 2-week notice to get your tattered flag replaced. 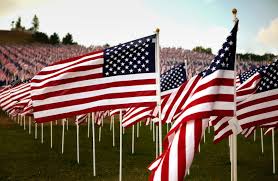 July 4th is right on the heels of Flag Day –  If you are traveling, perhaps we have that neighbor help by putting out the flag in your absence.

So town-folk, I am asking for you to prove me right.  Prove that nationalism in North Texas (or wherever you live) is not dead and that you just got busy.  I dare to dream of a town where on the Fourth of July, there are as many houses with an American Flag flying in front as those that put pumpkins out for Halloween (or dare I say it – lights for the Holidays!?!?).   Can we make that happen?  Can we show those who continually sacrifice that their service is appreciated?

In the meantime, safe travels and I will see you at the Fourth of July picnic.

All across America today, families are getting ready to hit the road for the Memorial Day weekend.  According to AAA, this unofficial start of summer will see more than 36 Million people on the roads.  For most this means drive through, gas station and convenience store food that is overloaded with salt, sugar and preservatives.  But it doesn’t have to be, you can travel different!!

If you are a parent, I want you to think back to when you had a toddler.  If you are not a parent, I want you to think about any parent you have ever seen traveling with a toddler.  When you are traveling with a toddler, you bring everything but the kitchen sink to keep them occupied and happy.  You sling a bag over your shoulder that has a capacity the rivals anything Mary Poppins or Hermione Grainger were ever seen carrying.  Toys, extra socks, towels, books and………….A SNACK BAG!!

Why is it when we get older we stop carrying a snack bag?

Now I am not advocating that you pack a Tupperware full of Goldfish and Fruit Snacks but packing for your health is a smart idea for everyone, not just the little ones.  A snack bag is one of the key things that I bring with me on every trip, every trip.

So what do I pack?

Now my list is focused on what will make it through TSA at the airport.  If you are heading out in the car, this list expands exponentially with the simple addition of an insulated lunch box or small cooler.

So get out there and enjoy the holiday weekend but remember to pack that snack bag!

See you on the road!!